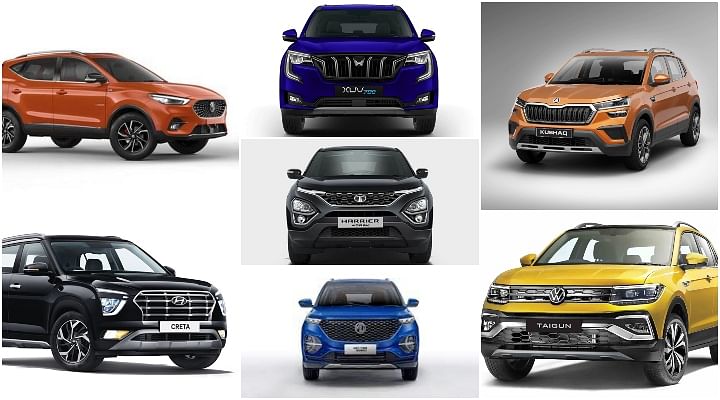 Safety in cars is a major concern for every buyer these days. Unlike the older times when people were focused on getting a high mileage, the mass market is now enlightened about the good build quality of a car. So much so that they don't want any compromise on their safety and want the build quality to be rigid and the model gets more than two airbags. Mr Nitin Gadkari, Minister of Road Transport and Highways recently issued a draft stating, in order to enhance the safety of the consumers, the automotive companies need to provide at least 6 airbags as standard for vehicles carrying up to eight passengers. In this article, we will share the list of all the 20 cars that are available in India with 6 airbags. Let's have a look!

The sportier version of the i20, N Line is offered in two variants namely N6 and N8. The top of the line, N8 is available with 6 airbags and costs Rs 10.94 lakh for the iMT gearbox. It is available with a 7-speed DCT too that costs Rs 11.82 lakh. All prices stick to ex-showroom, Delhi. Under the hood, the 1.0L turbo petrol churns out 118 bhp with 172 Nm of peak torque.

Hyundai Venue is one of the subtle looking compact SUVs in the segment. The SX(O) variant gets as many as 6 airbags and comes with two engine choices - 1.0L turbo petrol and 1.5L diesel. A 6-speed iMT for the 1.0L petrol and a 6-speed manual for the 1.5L is available as an option. The SX(O) petrol is priced at Rs 11.38 lakh whereas for the diesel is sticks at Rs 11.71 lakh. All prices stick to ex-showroom, Delhi.

One of the safest compact SUVs in the segment with a global NCAP crash rating of 5 stars, the W8(O) variant is the one that offers as many as 6 airbags. The petrol version is priced at Rs 12.03 lakh for the manual and Rs 12.69 lakh for the AMT. The same variant with a diesel engine is priced from Rs 12.85 lakh onwards. All prices stick to ex-showroom, Delhi.

One of the premium looking sedans, the fifth-gen Honda City was launch in 2020. The new City offers plenty of features and safety equipment on the offer. Both the VX as well as the top of the line ZX trims are offered with 6 airbags as standard. Honda City is available with two engine options - 1.5L petrol and a 1.5L diesel The former generates as much as 119 bhp with 145 Nm of peak torque and is mated to a 6-speed stick shift and an optional CVT gearbox. On the other hand, the oil burner generates 98 bhp with 200 Nm of peak torque. A 6-speed manual transmission comes as a standard on this one.

Hyundai Verna might not be the most spacious sedans in the segment but it surely packs in features up to the brim and gets an aggressive styling. The SX(O) variant of the Hyundai Verna packs in 6 airbags and is available with three engine options - 1.0L turbo petrol, 1.5L petrol and a 1.5L diesel unit.

One of the feature-loaded mid-size SUVs, MG Astor has surely made its mark in the Indian auto industry. Both Sharp and Sharp (O) are available with 6 airbags. MG Astor is available with both 1.5L petrol and 1.3L turbo petrol unit. The former generates as much as 108 bhp with 144 Nm of peak torque while 1.3L turbo petrol produces 138 bhp with 220 Nm of peak torque. A 5-speed manual and CVT is observed in the 1.5L petrol while the turbo petrol option gets a torque converter unit only.

Skoda Kushaq is one of the most sorted SUVs in terms of driving dynamics and styling. Its top of the line, Style variant is available with as many as 6 airbags and comes with both 1.0L petrol as well as 1.5L petrol option. A 6-speed manual transmission is seen as standard on both the engines while a 6-speed AT is reserved for the 1.0L and a 7-speed DSG for the bigger and more powerful 1.5L unit.

VW Taigun is 95% localised in the Indian market and its Topline as well as GT Plus are two variants available with 6 airbags as standard. The topline is reserved for the 1.0L TSI with both 6-speed manual and 6-speed auto unit while the GT Plus comes with the 1.5L with 7-speed DSG unit. The 1.0L churns out as much as 113 bhp with 175 Nm of peak torque whereas the bigger 1.5L produces 148 bhp with 250 Nm of maximum torque.

Launched back in 2019, Kia Seltos quickly garnered a fair share of market in the Indian auto industry and is now one of the top selling SUVs. There are three variants that are available with 6 airbags as standard and those are - GTX(O), GTX Plus and X Line. Kia Seltos is available with wide range of engine options to choose from - 1.5L petrol, 1.5L diesel and a more powerful 1.4L turbo petrol unit.

The SX(O) variant of the Hyundai Creta is equipped with six airbags as standard. The SX(O) trim is available with 1.5L diesel and 1.4L turbo petrol only. The diesel churns out 113 bhp with 250 Nm of maximum torque whereas the 1.4L turbo petrol makes 138 bhp with a peak torque of 242 Nm.

Hyundai Elantra is the only D-segment sedan under Rs 20 lakh that gets 6 airbags as standard from its base variant, SX. Under the hood, Elantra is powered by 2.0L petrol and 1.5L diesel unit. Globally, there's already a new model of the Elantra and we expect the newer 2022 version to be launched in India by later this year.

Hyundai Alcazar is one of the most value for money 6/7-seater SUVs present in the industry right now. The Platinum and Signature variants comes with 6 airbags as standard with both petrol and diesel engine options. The 2.0L petrol is the same as found in Tucson but now generates more power that is 157 bhp. The peak torque remains the same at 192 Nm. The diesel is the same as Creta's and generates 113 bhp on tap with a maximum torque of 250 Nm. Both the engines are mated to a 6-speed manual as standard and an optional 6-speed torque converter unit.

The homegrown carmaker has tasted success with the Harrier and with the launch of Dark Edition colour scheme, the sales have only gone up. Tata Harrier is one of the most demanding cars in the country right now and gets loads of features. An 8.8-inch touchscreen with Apple CarPlay and Android Auto, dual-tone interior, push button start/stop, electrically adjustable drivers seat, panoramic sunroof and some more accounts to the features list. Tata Harrier is only powered by a FCA sourced 2.0-litre, four-cylinder, BS6 compliant diesel unit. This engine churns out 168 bhp with 350 Nm of peak torque and is mated to a 6-speed manual gearbox as standard. You can also pick the 6-speed torque converter as an option.

The recently launched SUV, Mahindra XUV700 has already crossed 1 lakh bookings so far. The company has also registered 14,000 billings and there's a huge waiting period of up to 19 months for some of the variants. The AX7 variant and above are available with 6 airbags as standard. The new XUV700 is powered by two engine options - 2.0L Stallion petrol and a 2.2-litre mHawk diesel unit. The former is the similar one used in Thar but now churns out 197 bhp with 380 Nm of peak torque On the other hand, the diesel unit in the AX7 and AX7 Luxury generates 182 bhp with 420 Nm of peak torque with the 6-speed manual transmission. For the automatic, the torque figures stick to 450 Nm.

The extended version of the MG Hector, this Hector Plus is available with the same engine options as the 5-seater version. It is the top-spec Sharp variant that gets as many as 6 airbags. MG Hector also gets tyre pressure monitoring system, ISOFIX child seat mounts, ABS with EBD and ESP, traction control and hill hold control as other safety features.

The XZ variant is the one you can get for Rs 19.81 lakh and it hosts couple of safety features like six airbags, TPMS, front seat belt warning, high-speed alert system, ABS with EBD, electronic stability program, hill hold control, traction control, rear disc brakes and hill descent control. It is powered by the same 2.0L diesel engine like the Harrier and is available in both 6 and 7-seater option.

Kia Carens is priced from Rs 8.99 lakh to Rs 16.99 lakh, ex-showroom, Delhi. Right from the base variant, Premium, six airbags are made standard on this one. Under the hood, it is available with three engine options - 1.5L petrol, 1.5L diesel and a more powerful 1.4L turbo petrol.

Upcoming Cars To Be Launched In India With 6 Airbags

Skoda Slavia was showcased a few weeks ago and boy, it looks refreshing, Basically, it borrows design cues from the new Octavia and packs in a host of features. One of them is six airbags for the top of the line Style variant. This sedan will rival the fifth-gen Honda City and comes in two engine options - 1.0L TSI and a more powerful, 1.5L TSI. We expect the prices to start from Rs 9.99 lakh, ex-showroom, Delhi.

Another product based on the MQB AO IN platform, Volkswagen Virtus shares the same engine specs as the Skoda Slavia. We believe that the variants distribution will be identical to their SUV, Taigun. That means, the Topline and GT Plus will receive as many as six airbags as standard.

So do you agree with the draft that states six airbags should be made standard in cars carrying up to eight passengers? Do let us know your thoughts in the comment section below. We've covered all the existing cars that are available in India with 6 airbags along with the upcoming ones. Would you like to read more about this stuff? Comment down below.