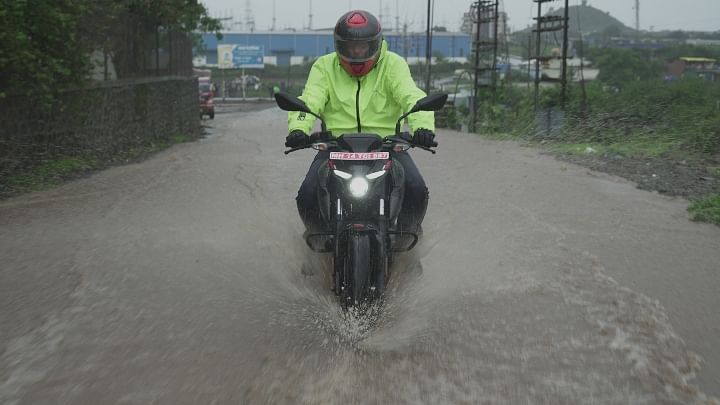 2022 Bajaj Pulsar N160 is the latest entrant in the segment of sports bikes in India. Here we discuss its top pros and cons to help you make a buying choice.

We tested the new 2022 Bajaj Pulsar N160 recently (read the full report here). Bajaj is trying to revamp its Pulsar brand with a new design approach and better engines. Hence, the Pulsar N160 has come into play. However, with its beautiful design and iconic name, it has its fair share of ups and downs. Here, we discuss the top pros and cons of the new N160 in detail which shall help you in making a better buying choice.

Yes, the Pulsar brand has been infamously known for not-so-good build quality. Well, say goodbye to that with the N160. The overall quality of the bike is extremely good. The fuel tank is made out of metal itself & the plastic used on the bike is hard enough to last long. Additionally, it is the design that appeals even more to new customers. Bajaj has carried forward major design traits from the Pulsar N250. The overall outlook gives it a big bike feel when compared with the rivals.

The 160cc, single-cylinder, oil-cooled, FI unit is one heck of an engine. It is full of low-end torque and mid-range juice. However, the top-end performance especially past 6-7K RPM becomes a little bit buzzy. Nevertheless, the low-end response of this engine makes the N160 one of the most engaging sports commuter bikes to ride within the city limits. This engine makes a peak power of 16 PS and a peak torque of 14.65 Nm. Bajaj offers a 5-speed gearbox to utilize this power.

Another major positive that we personally liked in the new N160 is its clutch action. The clutch is super light and feels very user-friendly to use. In fact, the precise action and short throw of the clutch make it feel that one is riding a smaller-capacity bike. Bajaj has brilliantly designed the clutch so that the rider does not feel fatigued during the bumper-to-bumper traffic commute within the city. Additionally, the light clutch also helps in fast gearshifts.

Bajaj is known for making one of the most powerful yet fuel-efficient bikes. The N160 is no different from this fact. The new 160cc engine is capable of performing well within the city limits as well as on the highways. However, it is its fuel-efficient nature that helps the N160 establish itself as a brand. We tested the bike in Pune's monsoon and rode it for more than 125 km. During our test ride, we crossed a lot of bad roads and water crossings. Mind you, it was consistently raining as well. However, in such extreme conditions, the N160 was giving us above 38 kmpl which is brilliant according to the segment standards.

It is not that the N160 is full of good things. It also has its fair share of cons. One of the major flaws of this bike that we experienced is its rear suspension. The rear suspension is too stiff to be precise. In fact, it is one of the stiffest suspensions in its segment as well as the segment above. Although, this helps in attaining high-speed confidence on the highways. But, over the undulated city roads and rough patches, your lower back is going to have a tough time. Additionally, the seat cushion is also on the harder side. Thus, the overall experience of ride quality is not as good as you would expect it to be.

Compared to its rivals like the TVS Apache RTR 160 4V, the N160 is far behind in terms of features. While the TVS offers multiple riding modes and Bluetooth smartphone connectivity; the N160 lacks both. Additionally, the instrument panel itself is semi-digital. A fully digital instrument cluster is what we see usually nowadays on most of this segment's bikes. However, Bajaj has kept itself from fitting modern techs on the N160.

Priced between Rs 1.23-1.28 lakh, the N160 is definitely one of the most aggressively priced bikes in its segment. Its powerful engine and premium design make a good case for itself among potential buyers. However, the lack of features and stiff suspension is something that could've been better. Let us know in the comments why will you choose the Bajaj Pulsar N160 over its rivals.