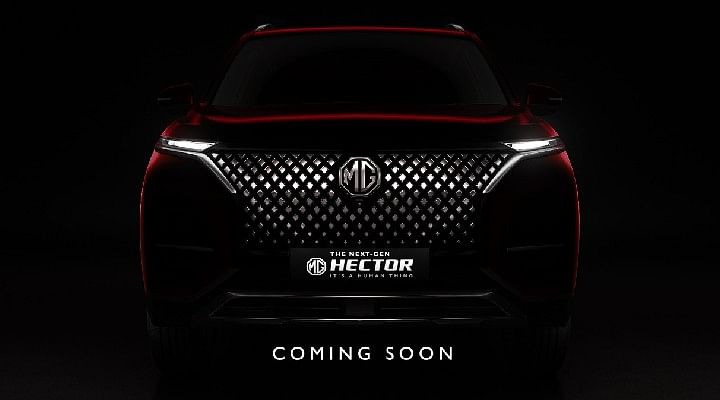 With the SUV market becoming more competitive, MG Motors is getting ready to update its best-selling Hector SUV in India. The brand recently teased the updated 14-inch touchscreen infotainment screen, and now it has teased the 2022 Hector's front fascia. The new teaser suggests that the brand may launch the facelift soon.

The new teaser reveals a new Argyle?diamond mesh front grille.?The test mules for the 2022 Hector, also known as the Next-Gen Hector, have also been sighted, which indicates that the new facelift will have several cosmetic changes. A recent test mule was spotted re-fuelling nearby the MG facility in Gujarat. Additionally, a new bumper and LED headlights are expected to be included.

If we talk about additional features, MG might include Level 2 ADAS in the 2022 Hector to improve the car's safety and driving convenience. Additionally, there may be some small alterations to the interior that are currently unknown.

It will continue to provide the same 2.0-litre diesel and 1.5-litre petrol engines when it comes to engine specifications. While the petrol engine is available with both a manual and an automatic transmission, the diesel engine only has a manual transmission. The brand may modify the engines to improve fuel efficiency. Also, it may include a premium price tag over the current generation of the SUV.

After the debut of the Next-gen Hector, the manufacturer might also unveil an updated version of the Hector Plus. According to MG, the all-new 2022 Hector will be introduced by year's end in India. However, the company has not formally announced any dates.