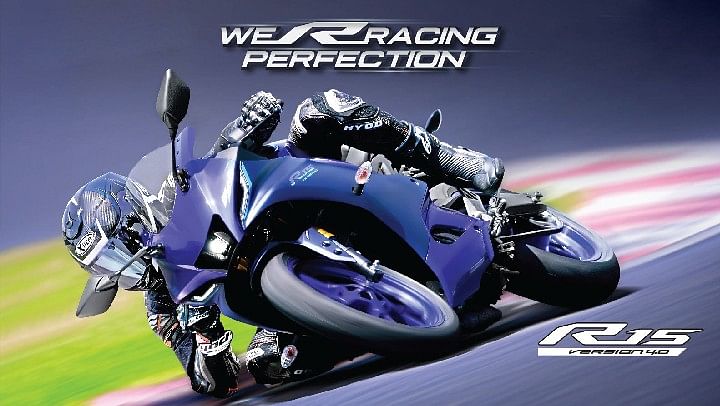 2022 Yamaha R15 V4 is already on sale in India. We tell you the top pros and cons of one of the most favorite sports bikes in India.

The Yamaha R15 has been one of the best-selling entry-level sports bikes in India. With the launch of the 2022 Yamaha R15 V4, the company has offered even more tech and features. One of the best-selling machines from Yamaha's cradle has now gone one step ahead. The addition of tech, features, & more performance means that the bike is now even more desirable than ever. Here, we discuss its top pros and cons to help you make a more detailed buying choice.

While the old gen R15 S V3 was also sharp and strikingly beautiful to look at; the new one has taken the game one step ahead. Yes, the V4 now gets styling inspired by its bigger siblings. The front now uses a single LED projector headlight with twin LED DRLs. This design mimics the Yamaha R7 sports bike to an extent. There is also an air dam that helps in its aero stability. Additionally, the fuel tank and the fairing have also been revised completely.

The biggest pro of the new V4 is its all-new suspension at the front. A USD unit with 37mm thickness is what the V4 gets at the front. This has exponentially increased the strength and handling of the new bike. It has also got a triple clamp to hold on for better stability and more rigidity. This is indeed a big update as the V3 came fitted with a telescopic front suspension.

Yamaha has also added new features like the quickshifter, traction control, slipper-assist clutch function, & even the dual-channel ABS as standard. Also, the buyers now get the option of buying a more aesthetically pleasing variant i.e. the R15 V4 M. It is technically more or less the same but looks like a bigger MotoGP missile.

The 155cc, single-cylinder, liquid-cooled engine has been a forte to the R15. In its latest avatar, this engine has become even more refined. However, to meet the BS6 emission norms, the power figures have gone down very minimal. The new engine now makes a peak power of 18.1 bhp and peak torque of 14.2 Nm. It gets a 6-speed gearbox as standard. The main talking point remains the use of Variable Valve Actuation (VVA) technology that helps make it more fuel efficient.

Yes, being a sports bike it is quite normal to have a very dedicated riding position. The R15 V4 feels at home during short rides or on track tarmac. However, it is the long-distance rides that make the rider feel very uncomfortable. The front set riding position is too demanding. In fact, when compared to the first gen of R15, the V4 has become a little bit too dedicated. The rear-set footpegs for the rider and the position of the handlebar make up for a tough time during long hauls.

Indeed, the USD suspension has helped in improving the handling but only on paved roads. Once you face undulations or uneven roads, the R15 V4 becomes too much bouncy and feels a lot stiffer. This is due to the stiff suspension setup. The positive side is that the suspension makes up for very confidence-inspiring handling over the tarmac. However, the bad roads are not easily dealt with this one.

Priced at Rs 1.77-1.91 lakh ex-showroom, the R15 V4 is indeed costly. Its main rival is the KTM RC 200 which is nearly priced but offers more engine performance and power. Hence, the pricing remains another downside for the new R15.

Offering one of the best in class handling and performance, the R15 V4 is a reliable Japanese workhorse. It is fuel-efficient, it is reliable, and it has the grunt to pull it through anywhere. However, with steep pricing and powerful rivals on offer, will you make a choice for it? Let us know in the comment section about it.