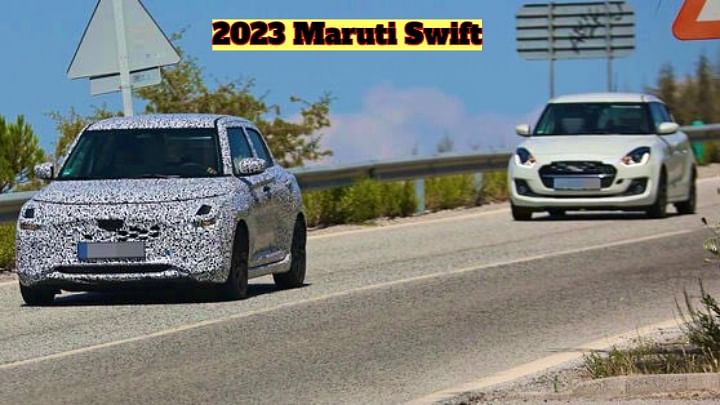 2023 Maruti Suzuki Swift has been spied yet again on test globally. The new car will feature a revised design & mild-hybrid technology as well.

The European turf is currently the testing ground for the upcoming-gen Swift. Yes, the much beloved Swift is getting a makeover right now. The 2023 Maruti Suzuki Swift was spied testing once again globally. This time, the spy shots captured the test car along with the current model as well. The upcoming generation of Swift is believed to bring substantial changes to the brand.

As visible in the spy photos, the car is completely camouflaged. However, this does not stop us from getting an idea of what will be the changes to the exterior. For starters, the front end seems to have undergone a complete makeover. The LED projector headlights are now more stretched-out and sharp looking. In fact, the bonnet also has more muscular body lines. The bumper will also be reworked for the new air-vent design and sharper looks.

On the side, the new Swift might lose its coupe-like roofline design. Because the test car featured a less slanting roof design. This might be done for increasing rear headroom and overall cabin space. Suzuki has also removed the door handles from the windows to the door panels. The C-pillar is also wide and thick ever seen on a Swift. Additionally, the alloy wheels have been redesigned into a multiple-spoke layout.

Shift to the rear end, one can easily notice the bigger rear windscreen. Also, the boot lid curve and the bumper have been carved into a more butch outlook. It also has a spoiler and a rear wash & wiper. Feature-wise, we suspect that the new Swift will come with the latest tech like - a 360-degree park assist camera, HUD, 9-inch infotainment system, wireless phone charging, & new dashboard design.

Under the hood, Swift comes with a 1.2-Lt, K12C DualJet motor. This engine has become a testament to refinement and efficiency in its segment. It churns out peak power of 90 hp and 113 Nm of peak torque. However, the new-gen Swift might feature a mild-hybrid tech in it. This means the fuel economy figures will go higher. This tech will be similar to the newly introduced Grand Vitara SUV.

Transmission options will include the 5-speed manual along with a 5-speed AMT automatic gearbox. Both of these gearbox units will be derived from the 2022 Baleno. Sadly, the iconic Swift Sport still seems to be a dream for the Indian market. In fact, the new-gen car is also not expected to bring this sporty variant into our market.

As the development of the new car undergoes; we expect that it will not be any time before 2023 that the new Swift sees the daylight in India. Yes, the wait is longer than expected but it sure will be worth it. Pricing will be north of the current rate list due to the addition of new features and technology. The main rivals include - Tata Tiago & Hyundai Grand i10 NIOS.