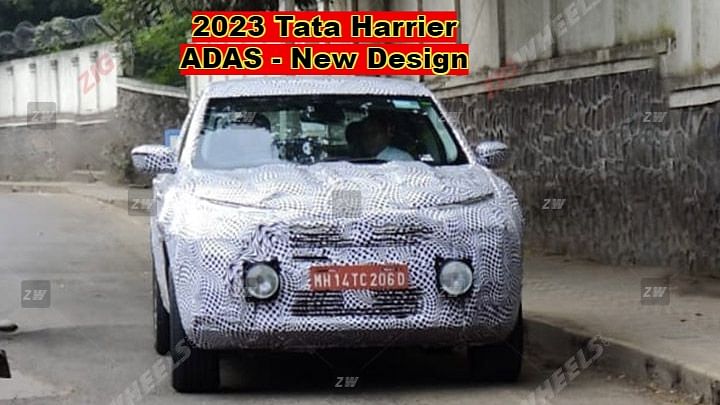 2023 Tata Harrier facelift is underworking. A test car of it has been spied with subtle design changes while hosting an ADAS radar up front.

Tata Motors is currently on an expansion spree. With the launch of new rivals in the mid-size SUV segment, Tata is also working on something new. Yes, the 2023 Tata Harrier facelift has been spied for the first time. This updated model is suspected to get a new design and even ADAS assist. Its debut is most probably going to take place next year.

Now, speaking of the design updates the car looks largely the same at first glance. However, look closely and the front is new. Although, Tata has camouflaged this test car completely the design elements are partially visible. The new Harrier is going to get a new front design. It will embrace new headlights, a revised front bumper, and a new front grille as well.

Additionally, the test car came with a front nose radar fitted on. This means Tata is testing the ADAS on the upcoming Harrier facelift. Why? Well, because most of the mid-size competitors are soon going to get updated with the same. The new 2022 Hyundai Creta, 2023 KIA Seltos, & even the newly launched Maruti Suzuki Grand Vitara are soon going to get the ADAS. This means Tata also needs to up its game.

Meanwhile, the rest of the car is also expected to undergo some subtle changes. Mostly updates, like the bigger infotainment system, new instrument cluster, and may be revised dashboard design as well. The facelifted Harrier is expected to be on display at the upcoming Indian Auto Expo 2023.

As we speak of it, the Harrier facelift undergoes continuous testing. However, it is very unlikely that Tata will introduce any new engine options in it. There are reports on the internet that suggest that even the petrol version of it is still far away. This means that the Harrier facelift shall continue using the same 2.0-Lt, FIAT-sourced diesel engine.

This engine makes peak power of 170 bhp and 350 Nm of peak torque. It is available with 6-speed manual and 6-speed automatic gearbox options. This mix of engine and transmissions is likely to remain the same on the facelift. More details will emerge in the coming weeks as the car nears its debut.