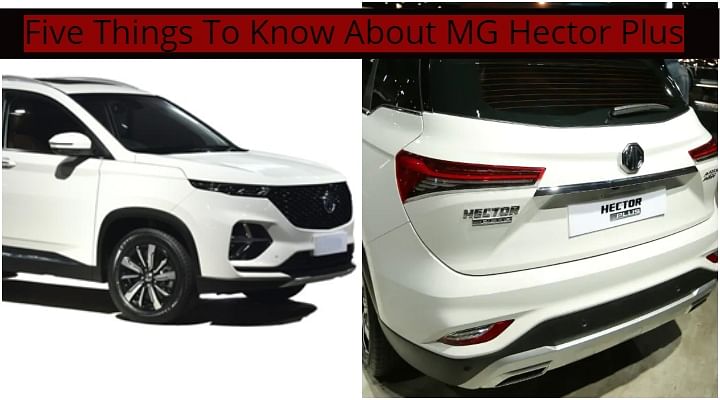 MG Motor India introduced Hector in June 2019 and ever since its launch, the mid-size SUV is seeing a decent number of sales. With its sheer size and the price ratio, the SUV is being loved by people across the country. While the 5-seater is catching up on the people, MG is now set to introduce Hector Plus which is a 6 seater SUV.

Yes, you heard it right, a 6 seater MG which will go by the monicker Hector Plus. The SUV was showcased at the 2020 Auto Expo too and for those saying what is the difference except for the seating configuration, then my friend, we bring you a total of five differences that comes with the Hector Plus!

Exteriors
This is the major change between the upcoming Hector Plus and Hector. The front is completely redesigned and now sees new bumpers, glossy black grille and new fog light housing. The chrome treatment at the front now gives way to a more subtle look.

Similar is the case on the rear profile as the chrome treatment which joined the taillights is now gone. It also gets tweaked bumper design with a faux diffuser which enhances the rear profile. The sides of the SUV looks more or less the same but now is a bit longer.

As what you can see from the table then it is the length which is about 40mm extra over the regular Hector. It is because for the addition of a 3rd-row bench and to make space for the added passengers. The width, height and even the wheelbase which is at 2,750 mm stick the same.

Interiors (6-seater or a 7-seater?)
It is not yet clear as to how many seating configurations will be available with the Hector Plus. Some say 6-seat and other claims an optional 7-seat layout will be provided. If the latter comes then more space in the SUV! Also, the six-seat version will come with captain row seats in the middle with 50:50 split-row folding third-row bench. If the 7-seat is in action then it will be in 60:40 split. Regarding the scheme then like the Hector, it will remain unchanged.

Features
Being a connected car and the wildness badging of Internet Inside, the Hector Plus too will continue this legacy. On the inside, it will host a larger 10.25-inch touchscreen infotainment system, larger panoramic sunroof, electrically adjustable drivers and co-drivers seat, mood lighting, 360-degree camera, 7.0-inch MID, PU-leatherette upholstery and among others.

Also Read: Stock Vs Modified Isuzu D-Max V-Cross Together In A Video: Pick One

Prices and Competition
Currently, MG Hector is priced from Rs 12.73 lakh for the base model and the top trim fetches till Rs 17.73 lakh, ex-showroom, Delhi. We expect that MG will hike the prices of Hector Plus by Rs 50K-60K. Once launched, it will take on the likes of Tata Gravitas, which is a 6/7 seater version of the Harrier.