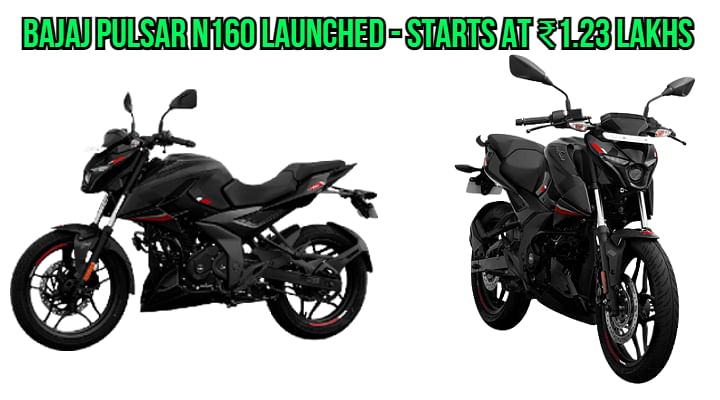 The highly anticipated Bajaj Pulsar N160 has finally been launched. Prices for the bike start at Rs 1.23 lakhs (ex-showroom). This launch marks the debut of the 160cc variant of the pulsar on the new platform that was recently introduced on its bigger sibling, the N250.

The Bajaj Pulsar N160 is powered by a new 164.82 cc SOHC, 2-valve oil-cooled engine that produces 16 PS @ 8750 rpm and 14.65 Nm @ 6750 rpm. While the torque output has increased ever so slightly, the power output sees a slight reduction compared to its predecessor - the NS160. The power and torque figures are also quite similar to its rival - the TVS Apache RTR 160 4V. Transmission duties on the new N160 are handled by a 5-speed constant mesh gearbox.

Bajaj also claims that the new engine has the capability to provide 85% of the peak power and torque over a wider rev range. They also claim that the Pulsar is the fastest accelerating bike from 30-70 km/hr in gears 3-4-5.

The Pulsar N160 gets 100/80 - 17 tyres in the front and 130/70-17 tyres in the rear. Both the tyres are of tubeless types. The front suspension consists of a 37 mm telescopic fork in the dual-channel ABS variant while the single-channel ABS variant has a 31 mm telescopic fork in the front. Rear suspension duties are handled by monoshocks on both variants

On this front, the N160 borrows a lot of features from its quarter-litre sibling. Some of the features on the N160 include LED headlamps, a USB charging port, a Semi-digital gauge cluster, a gear position indicator and a distance to empty indicator.

In terms of the dimensions, the wheelbase of the N160 is said to be 1358 mm. The seat height for the rider is 795 mm while the ground clearance is rated at 165 mm. The N160 gets a 14-litre fuel tank which again should help in giving a decent range to the bike on a full tank of fuel. The dual-channel ABS variant N160 weighs 154 Kg. This is 2 kg more than the single-channel ABS variant that tips the scales at 152 kg.

With the Bajaj Pulsar N160 getting launched, the 150-160cc segment is surely going to heat up in terms of competition. At the same, this also means that the market will soon bid adieu to the older NS160. Would you pick the new Pulsar N160 over its rivals? Let us know in the comments below.