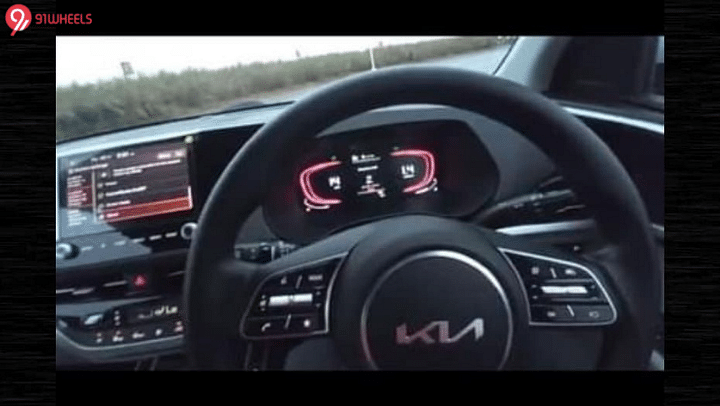 Kia is ready to launch Carens at the beginning of 2022. The car is expected to be offered in 1.5-litre diesel and petrol engine choices. The car has been regularly spotted testing on roads and the company will officially debut?the car next month. The upcoming Kia Carens will be positioned between Maruti Suzuki Ertiga and Toyota Innova Crysta.?

Earlier, only the car was spotted on roads and only the exterior images were leaked over the web whereas, the Kia Carens interior images have also been spied ahead of its global debut. The upcoming SUV will be a complete package of features and a mid-size SUV that will adhere to the ongoing trend. The SUV will be available in six and seven-seater options and it will have several similar features to that of Kia Seltos.?

The leaked spy images of the interior look like a mid variant as it is equipped with an 8-inch touchscreen infotainment system, automatic climate controls, a digital cockpit, a three-spoke steering wheel with steering mounted controls, and a cruise control system. It is also judged that the upcoming Carens will offer a spacious in-cabin.?

The India automotive market is already floating with six and seven seater SUVs like Hyundai Alcazar, Tata Safari, and MG Hector. However Kia Carens is also ready to make its entry in India.

So, what are your views on the Kia Carens interior? Do let us know through the comments section below. Join our 91Wheels Telegram and 91Wheels Whatsapp group to know more about vehicles, conduct discussions on your favourite ride and much more! Also, you can subscribe to our Youtube channel for video content on the latest from the world of cars and motorcycles.