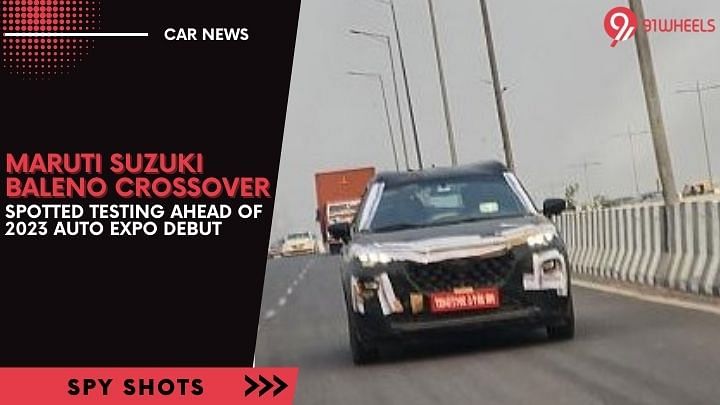 Cashing in on the ever-growing market share of high-ground clearance vehicles, Maruti Suzuki India Limited (MSIL) is ready with another exciting product for the Indian market. After launching the much anticipated Grand Vitara, the Indo-Japanese carmaker will debut the Baleno-based crossover at the 2023 Auto Expo. Codenamed YTB, the spy images of the beefed-up hatchback has been doing rounds for quite some time. In the latest round of spy shots, the crossover, although camouflaged can be seen in a production-ready avatar.

As the upcoming Baleno Crossover is based on its hatchback twin, it will most likely retain its overall dimensions and broader design philosophy. However, the spy images speak an altogether new story as the four-wheeler can be seen sporting an uplifted stance, a slightly sloping roofline and comparatively higher ground clearance. Moving further, the crossover seems to be taking some design inspirations from the Grand Vitara. The front fascia comprises a large honeycomb grille flanked by a split headlamp setup. The LED DRLs sit higher up while the main headlamp unit is placed below and the ORVMs on the test car are identical to what we have seen in the current Baleno.

As the car is based on the Baleno hatch, we can infer that it will be sold through the NEXA dealership chain. Talking about the market positioning, Maruti Suzuki will sit between Baleno and Brezza, thereby bridging the price gap and extending the choice range for customers.

Under the hood, the Baleno Crossover will likely utilize the familiar 1.2-litre K12C engine, with identical power figures of 88 bhp and 113 Nm of peak torque. If some media reports are to be believed, the four-wheeler can also get the 1.0-litre BoosterJet turbo petrol engine with a power output rated at around 100 bhp. Maruti can consider a CNG option at a later date.

The YTB Baleno Crossover will break cover at the 2023 Auto Expo, followed by its market launch in the first quarter of 2023. Once launched, the crossover will have no direct rivals, however, it will lock horns with some of the affordable compact SUVs such as the Nissan Magnite and Renault Kiger. Along with this, it will create an alternative for the lower trim of other mainstream sub-4-meter SUVs such as Hyundai Venue, Kia Sonet, Mahindra XUV300, Tata Nexon and the likes.

Verdict: The upcoming Baleno-based crossover is Maruti Suzuki's move to capture a larger set of customers by bridging the price gap between the Baleno and Brezza. The high ground clearance, SUVish stance and appealing price tag can serve as the right ingredients for brand's upcoming new product.