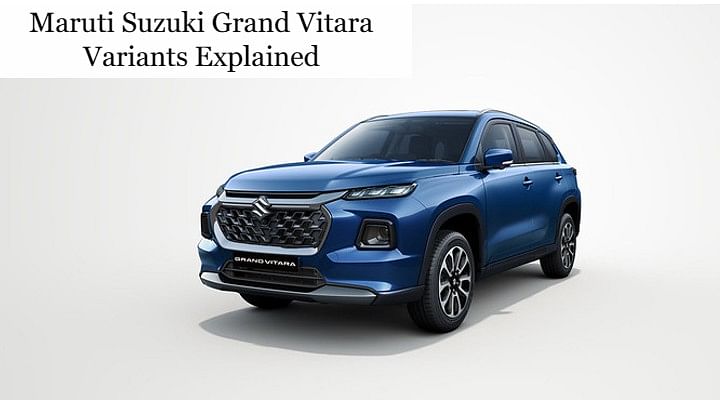 Maruti Suzuki has presented the Grand Vitara SUV for the global market. The Grand Vitara has undergone significant design and feature upgrades for its fifth generation. The Grand Vitara, the company's flagship SUV, will start selling in India in the coming months. This SUV is developed by Maruti in association with Toyota. Similar to the Urban Cruiser HyRyder, the Grand Vitara will include a full hybrid drivetrain in addition to a conventional petrol powertrain.

All of Grand Vitara's features and specs, as well as what each variant will include, have been released publicly by the manufacturer. We'll analyze the specifications and features of each available variant in this article.

Also Read: Toyota Urban Cruiser HyRyder Variants Explained - Here's What You Get In Each Trim?

The recently introduced Maruti Suzuki Grand Vitara employs the same engine as the Urban Cruiser HyRyder . It has a 1.5-liter K15C petrol engine and a 1.5-liter powerful hybrid engine. The Grand Vitara's 1.5-liter mild hybrid petrol engine has a 101 bhp of power output and a 136.8 Nm maximum torque capacity. This engine is combined with a 6-speed AT and a 5-speed manual gearbox. There is also an AWD configuration for this engine. According to the manufacturer, this engine can get 2WD mileage of 21.11 km/l with a manual transmission, 20.58 km/l with an automatic transmission, and 19.38 km/l with AllGrip AWD configuration.

On the other hand, the 1.5-liter TNGA Atkinson cycle powerful hybrid engine produces 92 bhp of power and 122 Nm of maximum torque. This engine is coupled with an electric motor that has a maximum torque of 141Nm and 79 bhp of power. The combined output of the engines produces 114 bhp and a maximum torque capacity of 141 Nm. This engine is equipped for 2WD and is connected to an e-drive (eCVT) transmission. According to the manufacturer, the powerful hybrid engine can produce an average of 27.97 km per litre.

The base trim for the Grand Vitara is called Sigma, and it only comes in a 1.5-liter smart hybrid petrol engine configuration with a 5-speed manual transmission.

Only the Smart Hybrid variant with a petrol engine comes in the Delta trim. It comes with a 5-speed manual transmission as standard and a 6-speed automatic transmission as an option.

Features of Delta trim over Sigma

Both petrol and an intelligent electric hybrid powertrain are offered in the Zeta trim level. A 6-speed AT gearbox and 5-speed manual transmission are included with the petrol engine. On the other hand, a powerful eCVT gearbox is combined with the hybrid engine. The Zeta trim is additionally offered in 2WD and All Grip AWD configurations.

Features of Zeta trim over Delta

In the Grand Vitara's petrol version, the Alpha trim is the top-of-the-line trim. Although it has some extra functions, it has the same mechanical setup as the Zeta.

Features of Alpha trim over Zeta

The Grand Vitara is the first strong hybrid vehicle from the brand. The Intelligent Electric Drive Variant comes in Zeta+ and Alpha+ trims.

Features of the Zeta+ trim over the regular Alpha variant.

The Alpha+ variant is the most feature rich of all Grand Vitara trims. This model is only offered with a powerful hybrid drivetrain and 2WD.

Feature of Alpha+ trim over the Zeta+