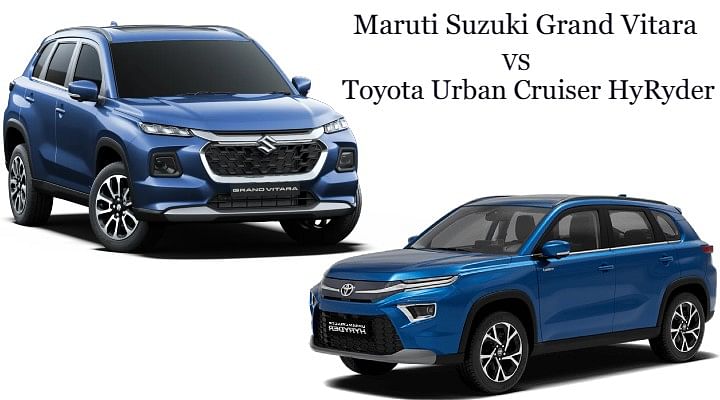 Maruti Suzuki's all-new global SUV Grand Vitara, has been unveiled in India. The Grand Vitara is created by Maruti Suzuki and Toyota. Toyota earlier debuted its sibling Urban Cruiser HyRyder as well. Due to the fact that both automobiles are built on the same platform, they share a same silhouette and many other characteristics. Both the models will be manufactures at Toyota's Karnataka plat. Here's a comparison of Grand Vitara vs HyRyder and their key differences.

The available powertrains for these cars are identical. Both SUVs have 1.5-liter petrol engines with mild hybrid technology and 1.5-liter TNGA powerful hybrid engines. The first engine is created by Maruti Suzuki's K15C engine, whilst the second is created by Toyota.

While the Grand Vitara's mileage figures are available but Toyota has not yet done the same for the HyRyder. According to the brand, the Grand Vitara achieves a top mileage of 27.97 km/l with its powerful hybrid powertrain. The mild hybrid engine returns 21.1 kilometres per liter.

Although both SUVs have a similar overall shape, their differences are readily apparent from the front. The Grand Vitara's front end features a new grille with black highlights and ice cube-shaped LED DRLs, but the headlight assembly is comparable to the HyRyder. The HyRyder has a grille like that of a Camry and a chrome line that joins the LED DRL bars.

Moving to the sides, they both have the same size tyres; the only difference is in the design of the alloy wheels. Both cars have streamlined taillights at the back. The Grand Vitara's taillights are divided by a light bar, while the Hyryder's are divided by a chrome strip. The Toyota has two C-shaped lights, whereas the Maruti Suzuki has an ice-cube design that mimics the front DRLs.

The Grand Vitara is available from Maruti in nine different colour schemes, six of which are monotone and three of which are two-tone. The HyRyder, on the other hand, is offered in 7 colours, 4 of which are dual-tone.

Although the interiors of the two SUVs are similar, they do differ in colour tones. Both SUVs have comparable AC vents and controls, multimedia display, instrument cluster, and steering design. Interior features and amenities are similarly comparable. Both vehicles come with a panoramic sunroof, ambient lighting, a full digital instrument cluster, a 360-degree camera, head-up display, wireless charging, wireless Android Auto and Apple CarPlay automatic climate control, a 9-inch Smart Pro Play Plus touchscreen infotainment system with connected car technology, and a drive mode selector on the AWD version.

While the Intelligent Electric Hybrid is only available in Zeta+ and Alpha+ variants, Maruti offers the mild hybrid engine in four different trims: Sigma, Delta, Zeta, and Alpha.

Whereas the strong hybrid is only available in S, G, and V trims, the Urban Cruiser HyRyder NeoDrive (mild-hybrid) powertrain is available in four trim levels: E, S, G, and V.

The companies have not yet disclosed the prices of their new SUVs; Toyota will do so in August, while Maruti may reveal the prices in September.