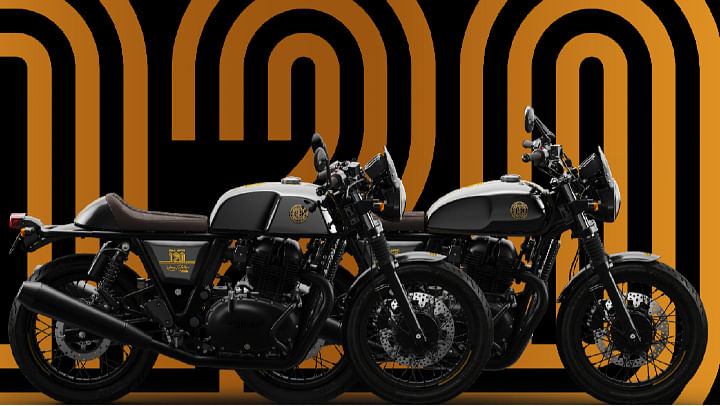 To mark the 120th year celebrations, Royal Enfield has launched two 120th Anniversary Edition 650 Twin models in the Indian market. These special edition models include the Interceptor and the Continental GT 650 motorcycles. The brand unveiled these models at the EICMA 2021 and has announced that only 480 units of these bikes are to be made available globally. Out of these, 60 units each will be made available in India, South-East Asia, Americas, and Europe markets respectively. The Royal Enfield 120th Year Anniversary Edition 650 bikes will be available in India via an online sale on December 6, 2021 and the registrations for these models have already begun.

The first Royal Enfield motorcycle was launched in November 1901 at the Stanley Cycle Show in London and the brand has since inspired millions in their pursuit of pure motorcycling over the last 120 years. To mark this milestone, the brand unveiled the 120th Year Aniversary Edition of its popular 650 twin motorcycles - the Interceptor INT 650 and Continental GT 650 at EICMA 2021. These anniversary edition models have been designed and handcrafted by the company's teams across the UK and India.

For starters, these bikes get a rich black-chrome tank colour scheme that has been developed in-house, with Royal Enfield's industry-leading chroming technology. These motorcycles are chromed with an alternated, sustainable trivalent eco-friendly process. Furthermore, to complement the black chrome tanks, the bikes will also feature blacked-out components while the engine, silencer, and other elements will get an array of black colour schemes. A number of other Genuine Motorcycle Accessories will also be offered with these models. These include flyscreens, engine guards, heel guards, touring, and bar-end mirrors and many other accessories to compliment this design.

In addition to this, the bikes will also feature a very unique, handcrafted, die-cast brass tank badge. The brass badges have been made in collaboration with the Sirpi Senthil family who are multi-generational artisans from the temple town of Kumbakonam, Tamil Nadu, India. To make each motorcycle even more exclusive, the tank top badge will feature the unique serial number of each motorcycle indicating that it is 1 of 60 unique motorcycles in any of the four regions mentioned around the world. An additional side panel decal that is a special ode to Royal Enfield's 120 years is also be offered. The models will go on sale via a limited time online sale on December 6, 2021 in India.

So, what are your views on the Royal Enfield 120th Year Anniversary Edition 650 model? Do let us know through the comments section below. Join our 91Wheels Telegram and 91Wheels Whatsapp group to know more about vehicles, conduct discussions on your favourite ride and much more! Also, you can subscribe to our Youtube channel for video content on the latest from the world of cars and motorcycles.