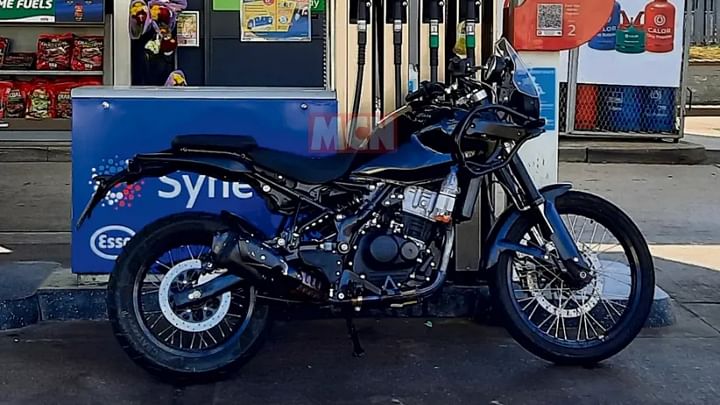 Cult bike maker Royal Enfield is currently working on a bigger Himalayan ADV. The upcoming Royal Enfield Himalayan 450 test bike has been spied globally at a fuel station. The test bike looked near production-ready as it featured uncovered body panels. It will be a big engine ADV with more power and the latest on offer.

The design of this upcoming Himalayan will be more or less like the rally-spec bikes. The long-neck frame design is evident in the photos. However, there is no beak at its front as we saw earlier on the Indian test bike. The elongated fuel tank looks slim and the rider seat has been attached in a way to provide more comfort to the rider on the go.

This test bike was spied in England near to the company's R&D center. Additional details of design include the use of new USD front suspension with long travel. The rear suspension is an adjustable monoshock unit. The new Himalayan will sit on 21-inch front and 17-inch rear spoke rim tyres.

In addition to these, a bigger engine is also evident on the test bike. One can also spot the liquid-cooling technology that the new Himalayan will feature. Meanwhile, the rear end is still a short tail design as it features the same taillight design as the current bike. For now, there are no official details regarding the engine & specs of the new upcoming model. However, we suspect that it will most probably be a 450cc engine that would make 40 hp (approx) peak power.

Meanwhile, it won't be any time sooner than 2023 until the new Himalayan breaks cover. Prices of it will expectedly go above Rs 2.5 lakh once launched. The rivals include - KTM Adventure 390, BMW G 310 GS.