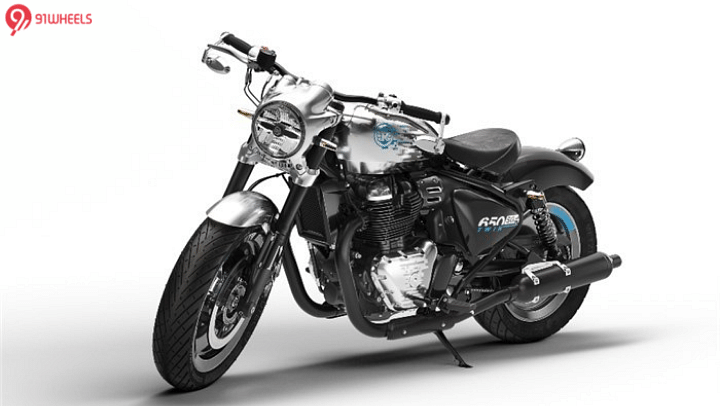 Royal Enfield is now on top of the list as compared to its rivals. The two-wheeler manufacturers have recently revealed another 650 cruiser - Royal Enfield SG650 Concept at the EICMA 20221. The bike will be launched in India anytime by 2022.?

The upcoming SG650 showcases a futuristic design language that comes equipped with USD forks and a twin shock absorber set-up. The motorcycle seen looks amazing in brushed aluminium and black colour that gets an attractive digitally engraved graphic scheme. The Royal Enfield SG650 Concept is a combination of its classic design language and gives an idea of how Royal Enfield will carry forward its futuristic motorcycles in India.?

The new upcoming cruiser will come with a round-shaped headlamp integrated with position lights. There is a cool looking cowl that is surrounded around the headlamp which is extended to the top to cover the instrument console. The bike looks quite modern with a chunky fuel tank that has a RE logo in blue. The bike from the rear is another attractive design element that comes with a chopped fender and wider Metzeler tyres.

The bike is expected to carry the same engine specifications offered with its Interceptor and Continental GT. These bikes are powered by a parallel twin, four-stroke, air/oil cooled 648cc engine that is capable of producing 47bhp of maximum power and 52 Nm of peak torque mated to a 6-speed constant mesh gearbox. The upcoming SG650 might receive an update in its power and torque figures.

The bike showcased at the EICMA 2021 is a concept motorcycle. The footpads, rear shock absorbers, USD forks, and switchgear all look like a true Royal Enfield product. RE has been spotted testing several times a 650 cruiser motorcycle which looks a bit similar to the concept revealed. From a strong block of aluminium, the wheels and tank have been CNC billet machined. The concept is a single-seater variant but it is expected that RE will introduce a cruiser seat in the accessories. The tail light also looks like a newly designed one giving it a Harley feel and touch.

The SG650 will be launched anytime by 2022. Royal Enfield is ready to expand its portfolio by introducing more and more new motorcycles in the market hitting the rivals hard.

So, what are your views about the new Royal Enfield SG650 Concept? Do let us know through the comments section below. Join our 91Wheels Telegram and 91Wheels Whatsapp group to know more about vehicles, conduct discussions on your favourite ride and much more! Also, you can subscribe to our Youtube channel for video content on the latest from the world of cars and motorcycles.