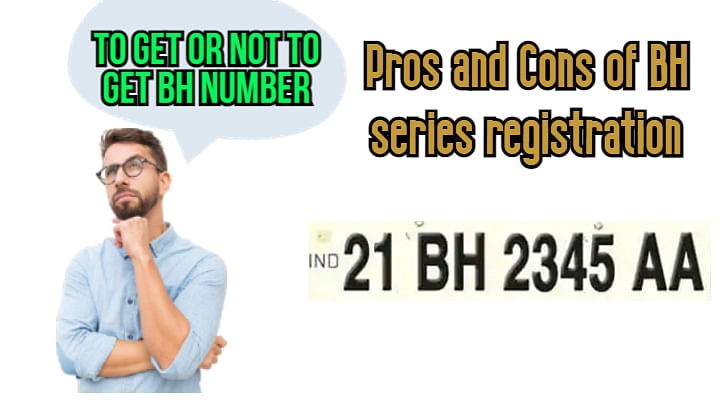 The introduction of BH series numbers for vehicles was one such step by the government that aimed at making vehicle ownership a relatively hassle-free process. Here is our article covering the pros and cons of having a BH series number and whether you should get one for your next car.

First of all, it is important to understand that the scheme of BH numbers, for now, has only been extended to a select group of individuals. On the basis of falling into the following categories, you may be eligible for getting your car registered under the aforementioned scheme. These categories are

Now this brings us to the Pros of the scheme

First of all, under the BH registration scheme, the road tax for the vehicle is paid only for 2 years. This biennial tax payment needs to be done for 14 years. Upon completion of 14 years, it needs to be done annually. This leads to a reduction in the upfront cost of the vehicle. Although this can be a con too, which will be covered below.

Secondly, in many states, you need to re-register the vehicle upon re-locating. This process can get really excruciating, more so when your job requires you to relocate frequently. Having a BH series number eliminates the need for such formalities. Also, local authorities tend to trouble owners of out-of-state vehicles in some places. Having a BH series number keeps you safe from this too.

However, not everything is perfect with this setup. There are certain cons associated with this scheme

For instance, there is no arrangement to pay the road tax for 14/15 years all at once. While it's not a big issue, it does add to quite a bit of inconvenience. Having the option to pay road tax for BH registration for 15 years would make life easy for many people.

Also, as of now, no policy has been introduced to help the owners of existing vehicles. So, people who don't really have plans of making a purchase are not really covered and that is a major chunk of the car-owning crowd who would be benefitted if something is introduced that covers existing vehicles too.

Also read: A Guide To Replace You Car Battery At Home In A Few Steps

Also, there is the other issue of many people not being aware of the scheme. Many dealerships are not very knowledgeable about this scheme and are thus hesitant to get cars registered with BH series numbers. This adds to the list of inconveniences associated with this scheme.

These were the pros and cons of having a BH number for your car. Will you get one for your next car? Let us know in the comments below.