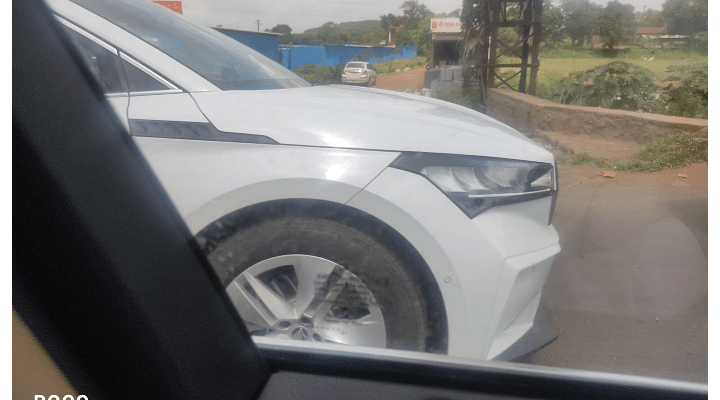 Skoda is playing big?in the Indian market; the company has developed vehicles like the Kushaq and Slavia specifically for the?country. Now, an upcoming?electric crossover from Skoda, the Enyaq iV, has now been spotted. The Enyaq iV will be the first electric Skoda car to debut?in India. Madhav Rajpurohit posted the most recent spy images on Twitter, and the car has been seen in Pune. The Enyaq iV has been spotted without any camouflage, which provides a clear indication of how the car will appear.?

As the company's first electric car, the Enyaq iV has been introduced in a number of international countries. In 2023, the Czech automaker is most likely to release this new electric coupe in the Indian market. VW's MEB platform serves as the foundation for the Enyaq iV. The Audi e-Tron and Volkswagen ID4 are two other EVs from the VW group that are built on this platform. The Enyaq iV will feature the signature Skoda design language as far as appearance is concerned. Like other electric vehicles, it will have a closed front grille.

The Enyaq is available in various models and drivetrains in the international lineup. The 80x model, which has a 77 kWh battery pack, was the one that was spotted recently in Pune. This model supports fast charging at 125kW DC. There are also different battery alternatives available for it, including 55kWh, 62kWh, and 82kWh battery packs. Which variant will be sold in India is currently unknown.

The Enyaq iV 80x will be the longest-range EV in India if the company?introduces the 80x variant and puts it on sale because it?has a WLTP-rated range of up to 513 kilometres and it can accelerate from 0 to 100 km/h in 6.9 seconds. The Skoda Enyaq iV, which will go up against the Kia EV6 and the upcoming Hyundai Ioniq 5, and?is anticipated to be available in India with the AWD configuration.