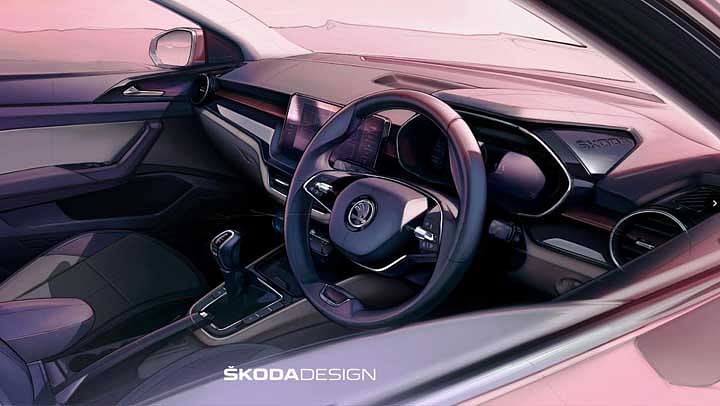 After giving us a glimpse of the exterior around a week back, Skoda India has now teased the interior of the Slavia through a design sketch. The new model, which is slated to become the logical successor to the Rapid, will make its debut on November 18. The new model will become the third product, after the Kushaq and the VW Taigun, to be based on the India-specific MQB-A0-IN platform. The market launch is expected to happen in the first quarter of next year.

The interior of the Skoda Slavia looks pretty familiar as you can find hints of the Octavia as well as the Kushaq. Akin to the latest crop of vehicles from the Czech automaker, the new model will have a classy two-spoke steering wheel with premium buttons and knobs. Taking centre stage on the dashboard is a 10-inch touchscreen infotainment unit that should be shared with the Kushaq. It is positioned right above the AC vents while a horizontal strip runs across the dashboard to give it a layered look.

Much like the Kushaq, the Slavia features a touchscreen interface for the climate control unit but unlike the compact SUV, it gets round side aircon vents instead of hexagonal units. This, of course, is in line with the overall sleek image of the vehicle. The centre console has a clean look and houses a wireless smartphone charger near the gear lever. Moreover, it can be clearly seen that the Slavia would get digital instrumentation, which is sure to look far more modern than the rather classy analogue dials seen on the Rapid.

Other highlights of the equipment list of the Skoda Slavia include wireless Apple CarPlay/Android Auto, MySkoda connected car technology, cruise control, rear parking camera and multi-collision brake. The Slavia will have the segment-largest wheelbase, which means the interior should feel a lot more spacious than that of the Rapid. More details, though, are awaited at the moment.

The Skoda Slavia would even share its engines and transmissions with the Kushaq, which means it would get the same 1.0-litre TSI and 1.5-litre TSI EVO turbocharged petrol units. The former will be available with 6-speed manual and automatic transmission options while the latter will be sold with 6-speed manual and 7-speed DSG units. The smaller motor will produce 115 PS of maximum power while the bigger motor will output segment-leading 150 PS.

The Slavia will lock horns with some well-established C2-segmenters like the Honda City, Maruti Suzuki Ciaz and Hyundai Verna. It should go on sale by March 2022 and its prices are expected to range from Rs 10 lakh to Rs 16 lakh (ex-showroom). It will be joined by its first cousin, VW Virtus later next year.

So, what do you think of the Skoda Slavia interior? Share your thoughts in the comments section below. Join our 91Wheels Telegram and 91Wheels Whatsapp group to know more about vehicles, conduct discussions on your favourite ride and much more! Also, you can subscribe to our Youtube channel for video content on the latest from the world of cars and motorcycles. Also, connect with us on Facebook, Instagram, and Twitter for more about vehicles!