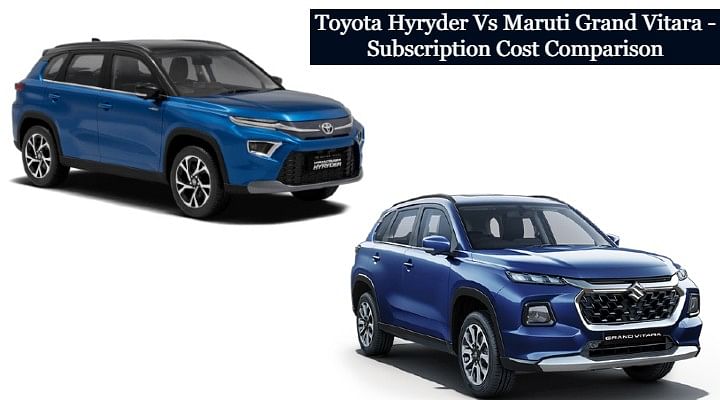 What Is Vehicle Subscription?

A vehicle subscription is a convenient way to get a new car. It provides variable tenure options beginning with one year. The fixed monthly fee includes the cost of the vehicle, road tax, insurance, and maintenance of the car, making ownership hassle-free. After the lease period is up, you can choose to return the automobile and replace it with another vehicle of your choice

The Toyota Urban Cruiser Hyryder & Maruti Grand Vitara both comes with a 1.5-litre Smart-Hybrid Petrol engine. This engine is able to produce power of 102 bhp and peak torque of 136.8 Nm. The engine comes with a 5-speed manual and a 6-speed automatic transmission.

The other engine option available is the 1.5-litre Strong Hybrid engine. This engine comprises of an electric motor and engine power which makes a combined power of 114 bhp and peak torque of 141 Nm. This engine is mated with a e-CVT transmission.

Note - The prices listed above are monthly prices based on a 12-month subscription period with 12,000 km for Toyota and 10,000 km for Maruti Suzuki, respectively.

Verdict: Maruti Suzuki currently has the advantage in the subscription segment. The brand offers all available options of Grand Vitara for subscription, and its costs are lower than Toyota's.