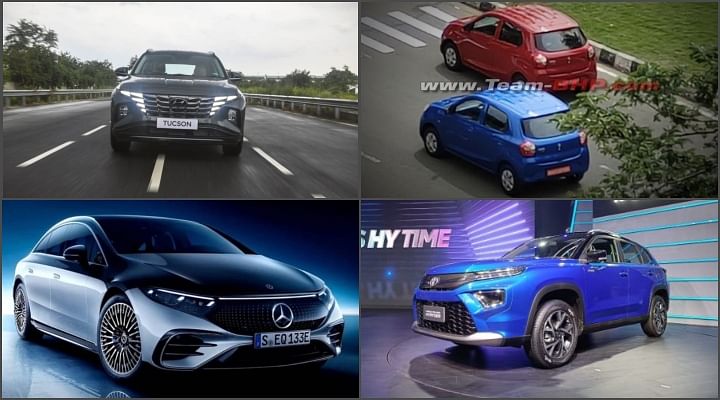 The year 2022 is raining with cars as several carmakers are bringing in newer models. This month too is great as it sees quite a few launches right from the new-gen Maruti Alto to Mercedes-Benz EQS. In this article, we will be sharing the details of upcoming cars that are launching in August 2022.

The entry-level hatchback from the Indian carmaker was spotted a few days ago on Indian roads. Spied in Speedy Blue colour scheme, the new-gen Alto resembled Celerio from the rear profile. Mechanically, the hatchback is expected to be offered in two engine options - 0.8L and a new 1.0L K10C that is also seen on the S-Presso. It will be launched in mid-August.

Also Read: Top 6 Fuel Efficient Diesel Cars In India - Which One Will You Pick?

The all-new Tucson will be launched on Aug, 10 and it targets the buyers of VW Tiguan, Jeep Compass and Citroen C5 Aircross. It is the only SUV in the segment to get ADAS functionality and several first-in-segment features. The SUV will be offered with two engine options - 2.0L petrol with a 6-speed AT and 2.0L diesel with an 8-speed AT. The latter also gets AWD as an option.

The upcoming mid-size SUV from the Japanese carmaker, Urban Cruiser Hyryder rivals the popular Hyundai Creta, Skoda Kushaq, Kia Seltos and VW Taigun. We expect the launch to happen in the last week of August and it will be offered with two engine options - 1.5L strong hybrid and 1.5L mild-hybrid.

The German carmaker is launching the electric version of S Class that will be brought in the country via the CBU route. This electric sedan gets a driving range of 586 km and brings in 1020 Nm of peak torque. The battery capacity sticks to 107.8 kWh and will be brought in with the full blown AMG variant. Mercedes will also launch the lower variants of the EQS at a later stage and those will be locally assembled. The EQS is launching on August 24.

Although it is not confirmed but we do expect the Grand Vitara to be launched in August. This and Toyota Hyryder shares the same platform, features and engine options. However, the design and variants differ from each other. Feature-wise, it will be offered with a panoramic sunroof, 9.0-inch touchscreen with wireless Apple CarPlay/Android Auto, head-up display, 360-degree camera, wireless charging, ventilated seats, Suzuki AllGrip system and more.