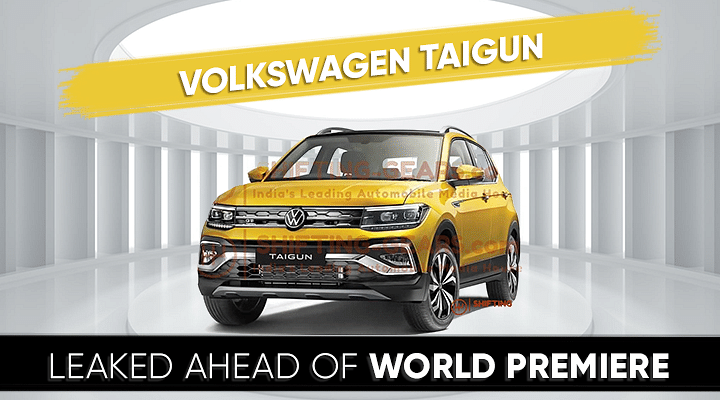 Just a few days ago, Skoda Auto India Private Limited showcased the all-new Skoda Kushaq mid-size SUV in India. The new Skoda Kushaq made its World Premiere in India on March 18, 2021. Now, within two weeks of the premiere of the Skoda Kushaq, the Volkswagen Taigun will make its Global Debut in India on March 31, 2021. And, just hours ahead of its official debut, the images of the Volkswagen Taigun have already leaked on the internet.

The Volkswagen Taigun will share its underpinnings and mechanicals with the Kushaq. Now, as you can see in these images, the Volkswagen Taigun looks really good. It seems to be the top-spec GT trim of the Taigun as we can see GT badging on the grille of the car. Talking about the aesthetic appeal of the SUV, so at the front, one can see that it gets a thin chrome-slated grille with honeycomb inserts. The grille is flanked by headlamps which seem to be LED projectors and it gets LED DRLs too. The fog lamps of the car are positioned below and it gets thick chrome accents with a connecting appeal at the lower half of the body.

Also Read: Honda H'ness CB 350 To Get A Massive Price Hike Of This Much Amount From April 1 - All Details

Moving to the side profile, one can see its dual-tone alloy wheels which are most likely 17-inch units, chrome door handles, and dual-tone paint scheme with blacked-out treatment for the roof. It seems to get functional roof rails and there is a shark-fin antenna too. The rear profile of the car looks even better, thanks to the LED taillamps with connecting treatment. It even gets a roof-mounted spoiler and there are chrome surrounds at the lower half of the body. The Volkswagen Taigun gets skid plates at the front and rear with body-cladding all-around for a bold SUVish appeal. The interior images of the car aren't out yet but one can expect it to be pretty feature-rich.