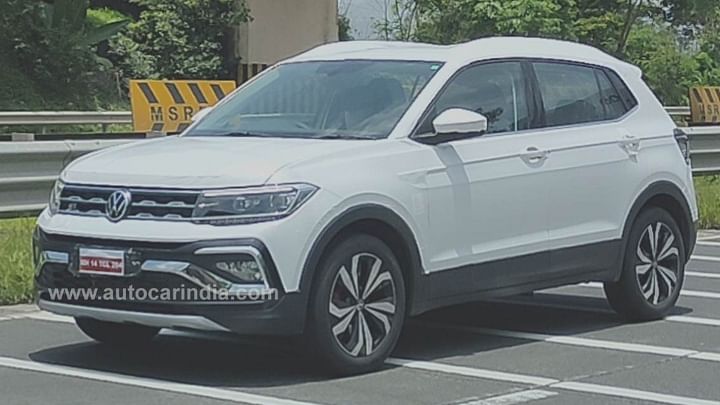 Volkswagen India unveiled the production-spec version of the Taigun mid-size SUV in March this year. The upcoming Volkswagen Taigun will be the second product from the VW group under Skoda-Volkswagen's new India 2.0 project. The Taigun is expected to be launched in India soon and now, ahead of its official India launch, its final production-spec version has been spied on test in the country. Let's have a look at the images and new details.

The upcoming Volkswagen Taigun was recently spied undergoing a test on the Mumbai-Pune Expressway near Mumbai in Maharashtra. The SUV was devoid of camouflage and it was finished in white colour. The VW Taigun will be a mid-size SUV from the house of this German car manufacturer. Just like most other VW cars, the new VW Taigun looks elegant but this SUV also gets a lot of chrome accents as it highly appeals the Indian car buyers.

Also Read: Audi e-tron India Launch On This Date - Check Out All The Details About This Luxury Electric SUV

Volkswagen has not yet officially revealed the interior of the production-spec version of the Taigun. However, we do know that it will come loaded with features up to the brim. The VW Taigun is expected to be launched in India in August 2021. It might be priced between Rs 10 lakhs - Rs 17 lakhs, Ex-showroom Delhi. Are you excited about its launch? Do feel free to share your opinions with all of us in the comments section below. You can also join our?91Wheels Auto Enthusiast Telegram group?(click via mobile to join) curated exclusively for the fans, enthusiasts and owners. Further, also subscribe to our?YouTube channel?for more amazing motoring updates.