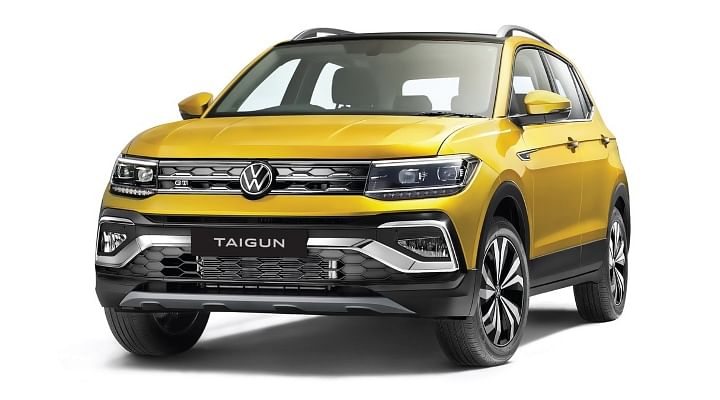 The Way It Looks

The Volkswagen Taigun is a handsome looking SUV. It looks elegant just like most other VW products and this time the company has added some design elements which highly appeal the Indian car buyers such as chrome bits. The VW Taigun gets a chrome-plated radiator grille with sleek projector headlamps along with LED DRLs. The fog lamps are housed below with thick chrome accents around them. Moving to the side profile, one can see 17-inch dual-tone alloy wheels and at the rear, it gets LED taillamps with a connecting treatment. The new VW Taigun gets skid plates at the front and rear and there is body-cladding all-around to lend it a rugged appeal.

The Volkswagen Taigun share its underpinnings and most of the parts with the Skoda Kushaq. Both these mid-size SUVs get an identical wheelbase and we believe the other dimensions will also remain more or less the same.

Volkswagen has not yet released the images of the production-spec Taigun. However, we do have some idea as to what all features it will pack. The VW Taigun will most likely get a big 10-inch touchscreen with Android Auto and Apple CarPlay connectivity, 6-speakers, wireless smartphone charger, an all-digital instrument cluster, ventilated seats, an electric sunroof among many others. The safety features of the car will include upto six airbags, ABS with EBD, reverse parking sensors with a rear parking camera, TPMS, ESC, etc.

The Volkswagen Taigun will be launched in India later this year just before the festive season kicks in which means around August 2021. It is expected to be priced between Rs. 10 lakhs - Rs. 17 lakhs, Ex-showroom Delhi. Upon launch, it will directly rival against the likes of Kia Seltos, Hyundai Creta, Nissan Kicks, etc. and its own sibling - Skoda Kushaq.

So, these were the top five things that you needed to know about the new 2021 Volkswagen Taigun. What are your thoughts on the new VW Taigun and do you think it will be a great success for VW in India? Do feel free to share your opinions with all of us in the comments section below. You can also join our 91Wheels Auto Enthusiast Telegram group (click via mobile to join) curated exclusively for the fans, enthusiasts and owners. Further, also subscribe to our YouTube channel for more amazing motoring updates.